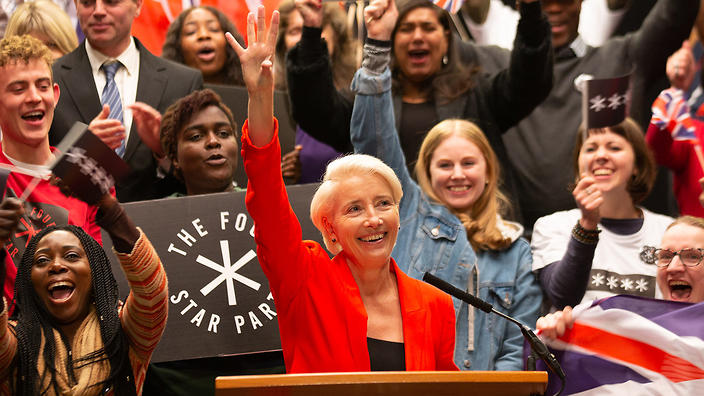 It's the most talked about show of the year, and it's coming to SBS and SBS On Demand in November.

Episode 3:
Rook proposes an IQ test to determine who can vote. That is alarming.
Interesting to see on who members of the Lyons family voted for at the election.
Interesting to found out about the orange burger. Wonder how that taste like.
The Lyons siblings are informed that their estranged father got killed in an accident when he was riding a bike as a courier.
At the funeral they meet their half-brother Steven who is similar in name spelling to one
of them Stephen.
Why couldn’t the father come up with a completely different name for his younger son and it was tiring hearing the same pronounced named brothers calling each other by their names.
Unbelievable that Edith literally drank her father!
Disturbing seeing the camera as an eye on Lizzie.
Perhaps not unexpected that Rook wins the balance of power and it ends with Stephen running with his rental car over a courier’s bike in frustrated remembrance of his late father.

The Next Time trailer sure gave it away on Rook becoming Prime Minister.

Episode 4:
Antepenultimate episode.
Russell T. Davies has clearly made references to his Doctor Who episode Turn Left.
When Daniel and Viktor were in a house they say that they are sharing it with 16 other people.
This is the same kind of situation that Donna, Sylvia and Wilf were in, in the alternate world in the said Doctor Who episode.
More explicitly when Stephen was attending to a medical situation he said that his head was turning left!
Remarking on how the world is now, Stephen says that they were born in a world when it was in a pause before it came into its present situation.
Having lived through such a pause brings me memories of a high school principal by the name of Geoff McNeil, who I have a disdain for, and the attitudes he expressed of the time.
I wonder if he realises now just how good he had it by then because I doubt that there is anything about today’s real world that he likes.
Britain has adopted compulsory voting, and as stated here, just like in Australia.
This is not the first time that Davies has made reference to Australian politics.
In the first episode of Torchwood: Miracle Day, The New World, there is a newsscroll that makes reference to the Australian Prime Minister.
In her latest exploits, Edith was in Greenland. Not long before seeing this, I saw MacGyver (2016) 3.17 Seeds + Permafrost + Feather which coincidentally has a visit to Greenland.
Edith sure made it known to Jonjo of what she would do if he wasn’t honourable in his intentions to Rosie.
Celeste finally exposes Stephen’s infidelity and Muriel throws him out. Not a pleasant situation to see.
Tragic that whilst on a boat with other people, Daniel drowns but Viktor.
The episode ends just as Rook has become Prime Minister something that was already seen in the Next Time trailer.

Episode 5:
Penultimate episode.
This episode has callbacks to Russell T. Davies’ time running Doctor Who and Torchwood.
Rook introduced the Bedroom Law that makes it mandatory that a spare room in a house be given to homeless person(s).
This is the same sort of situation that Donna, Sylvia and Willf in the alternate world in Doctor Who: Turn Left.
Another Turn Left reference is when Bethany gave that very direction to Edith.
This Years and Years episode revealed the disappearing homeless.
The homeless were also disappearing in Doctor Who: Rise of the Cybermen.
This Years and Years episode reveals a search producing nothing on the Internet.
The Three Families also did not come up on the Internet in Torchwood: Miracle Day.
This Years and Years episodes reveals the Erstwhile concentration camps.
Rocco and his family were sent to a similar camp in Doctor Who: Turn Left and the Torchwond: Miracle Day episode The Categories of Life presented the overflow camps.
This Years and Years episode guest starred Dan Starkey.
Long before he became well known as the Sontaran Strax in Doctor Who, Starkey played different Sontarans in the Davies-era Doctor Who stories The Sontaran Stratagem/The Poison Sky & The End of Time.
After the Davies era of Doctor Who, Starkey played Strax but his last appearance in TV Doctor Who is not as Strax but as Ian the Elf in Last Christmas.
Coincidentally months after Years and Years came the release of the movie also called Last Christmas and in another coincidence it was produced, co-written and featured Emma Thompson (Viv Rook).
What a surprise that Stephen meets Rook.
Horrifying about the Erstwhile camps.

This episode came on June 11 2019 and it was on the same day that saw the world debut in New York City of Men In Black: International which also featured Emma Thompson.

Men In Black is not unlike Torchwood and Years and Years was originally an idea for Torchwood.

Episode 6:
Finale.
The BBC shuts down. What a thought that this got presented here.
Quite compelling that speech by Muriel as she blames her children and their generation for what the world is today.
Exciting by the action that saw the shutdown of the death camp and the arrest of Viv Rook despite being the sitting Prime Minister.
Fascinating revelation that this all turned out to be an account by Edith as her body is about to die and her consciousness uploaded to the cloud although that has been left ambiguous.