With a brand new look, new coaches and a new production company ITV at the helm, series six of The Voice is set to raise the roof in 2017! Last year, the powerhouse format averaged 1.2 million viewers per episode and clocked up over 15 million page views across the series.

“We’ve just had an amazing experience shooting The Blinds for season six of The Voice. Viewers are going to love new Coaches Kelly and Boy George. Seal has already made his presence felt as he returns to the chair after winning the first two seasons of the show and Delta is back to defend her crown after winning last year with Alfie Arcuri.”

It seems like obvious marketing but using John Farnham’s classic You’re the Voice to plug the TV reality show The Voice took Channel 9 five years to bed down.

In a coup years in the making, Channel 9 has finally ­secured the rights to the Aussie classic to advertise the sixth season.

The Voice and The Voice

Season Six of the award-winning entertainment blockbuster will premiere over three huge nights on Monday, April 24, Tuesday, April 25, and Wednesday, April 26, with one of the biggest coaching lineups in Voice history.

New Coach Kelly Rowland hails from one of the most successful girl bands on the planet, Destiny’s Child with Beyoncé. A five-time Grammy Award winner, celebrated singer, songwriter and author, she is a multi-platinum-selling artist who has toured the globe extensively.

“I am so excited for Australia to see this series of The Voice. I have had such a great time working with Seal, George and the beautiful Delta, and we have experienced some really special moments,” Kelly said.

Kelly Rowland is joined by one of the world’s most influential artists, Boy George, another Grammy winner whose career spans more than 30 years. He has accumulated worldwide sales in excess of 150 million albums and singles with Culture Club and as a solo artist in his own right. As well as being a vocalist, he is a producer, author, DJ and frontman.

Kelly Rowland and Boy George join previous champions of the big red chair, internationally renowned singing sensation Seal and Australia’s sweetheart and reigning champion Delta Goodrem, as Coaches to bring Australia the most exciting season of The Voice yet.

This season The Voice producers have mounted the biggest talent search in the show’s history, reaching into the farthest corners of Australia. Thousands of people from all walks and stages of life auditioned before the list was cut to the lucky 100 who made it to the Blind Auditions.

BLIND AUDITIONS: Here we meet the hopefuls of Season Six who will audition for our Coaches in the hope of turning a chair.

KNOCKOUTS: Artists go head-to-head in groups of three as they perform a song their Coach has chosen within a theme. There are two thrilling “steals” per Coach up for grabs this season.

BATTLES: In the toughest round of this season, two artists go into battle with no “steals” available for the Coaches. Only three from each team will make it into the LIVE Shows.

LIVE SHOWS: This season will see a new format with fewer artists making it to the Live Shows. As the artists perform, a live public vote remains open throughout the show, determining which artist will go home each week.

The winner of The Voice will receive the grand prize of a recording contract with Universal Music Australia and $100,000 in cash.

The Voice Australia is filmed at Fox Studios in Sydney and produced by ITV Studios on behalf of Channel Nine.

The Voice had a massive night peaking at over 2m viewers.

House of Bond also did well, peaking at around 1.7m viewers.

Still don’t find a lot of gel between the four coaches. It is night and day compared to The Voice US, especially the fun arguments between Blake and Adam. I can see the nine one they have tried to emulate this but it seems way too fake.

Last night on the very first Live Show for The Voice 2017, we said goodbye to one member of the Top 12 artists. Leaving the competition was Robin Johnson from Team George, with Team Delta hunk Tim Conlon surviving the bottom two sudden-death sing-off.

The remaining 11 Artists will now prepare to perform in the second Live Show on Sunday, June 11, 2017 at 7:00 PM on Channel Nine, with multiple ARIA award-winning artists The Veronicas appearing as a special musical guest act.

It was also announced last night that international superstar Katy Perry will be performing live at The Voice Grand Finale.

“I’m so excited to bring my brand new record ‘Witness’ to you, and to perform on the Grand Finale of The Voice”, Perry said.

Katy Perry is one of the best-selling musical artists of all time, having sold over 100 million records globally, and having won numerous music awards.

Usher is the new coach on The Voice.

The Voice Ushers in a new coach

Joe Jonas Revealed As The New Superstar Coach On The Voice

Grammy-nominated multi-platinum recording artist Joe Jonas will be filling the fourth and final red chair on the next season of The Voice Australia in early 2018.

Starting out as a member of the Grammy Award-nominated band The Jonas Brothers, Joe and his brothers Nick and Kevin took the world by storm with hits such as S.O.S. and Burnin’ Up as they went on to sell in excess of 17 million albums globally.

Joe is now the frontman of the multi-platinum-selling band DNCE, who found instant success with their self-titled debut album, having won the MTV Video Music Award for Best New Artist and Best PUSH Artist at the MTV European Music Awards in 2016.

Their breakout smash hit Cake By The Ocean has already amassed nearly 300 million views on YouTube and generated over one billion streams worldwide.

Having also collaborated with international stars such as Nicki Minaj, Rod Stewart and Demi Lovato, Joe has gained a wealth of experience throughout his musical career.

After starring on The Voice earlier this year in the US after Coach Adam Levine selected him as mentor for his team, Joe Jonas is now ready to come Down Under and fill one of the famous turning chairs himself.

“I couldn’t be more excited to be a part of a massive show like The Voice, especially getting to do it all in Australia where the fans are amazing,” Jonas said. “I had a taste of the show in the US this year, so now I have the knowledge to take #TeamJoe all the way in 2018.”

Joe Jonas joins returning coaches Delta Goodrem, Boy George and Kelly Rowland to round out the lineup of Coaches on Season 7 of The Voice Australia.

The Voice Australia, hosted by Sonia Kruger, will return to Channel Nine and 9Now in 2018.

The Voice Australia is produced by ITV Australia on behalf of Channel Nine.

When love takes over: The Voice contestant proposes on stage after auditioning

The romantic gesture prompted coach Kelly Rowland to make an offer to perform at their wedding. 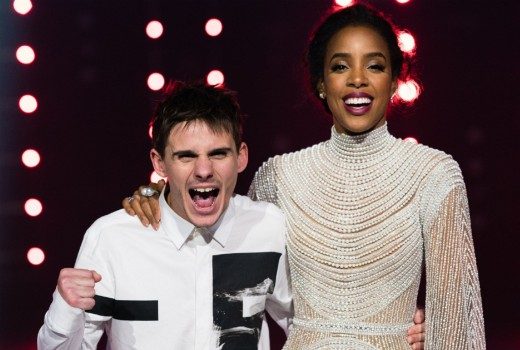 Perth “looper” beats out 3 pop vocalists for the 2018 title.

2020 sees the return of Australia’s entertainment sensation, The Voice, in what promises to be the biggest and most thrilling season yet, featuring some absolutely amazing voices from around the country.

Fronting the show this season is an all-new dynamic hosting duo of Darren McMullen and Renee Bargh.

McMullen returns to the show after having hosted the first four seasons of The Voice Australia as well as The Voice Kids, and having played roles in the Logie award-winning drama House Husbands and SeaChange, both on Nine.

“I’ve hosted a lot of fun shows around the globe since leaving but nothing compares to the buzz you get from walking out onto The Voice stage”, said McMullen. “The seasons that I hosted were the most fun I’ve ever had in television, and I can’t wait to pick up the reigns again to front the biggest show in Australia.”

An Australian native, Bargh is a newcomer to The Voice family, although is no stranger to rubbing shoulders with some of the biggest stars in the world, having spent the past decade as a host on Emmy award-winning US entertainment show, EXTRA. She returns home to star on Australian TV for the first time in ten years.

“It’s an absolute dream come true to be heading home to Australia and joining The Voice family”, said Bargh. “When it comes to entertainment television, it doesn’t get much bigger or more dynamic than The Voice. I’ve always been a huge fan of the show and am looking forward to meeting the next wave of incredibly talented Aussie artists”.

For the first time, all four superstar Coaches will return, following a stellar showing in season eight which left fans eager for more.

Kelly Rowland, Guy Sebastian, Delta Goodrem, and the reigning winning Coach Boy George all return to battle over the next wave of breakout artists, with plenty of surprises in-store.

They won’t hold back in their opinions of the artists and of one another, as they work alongside their teams of artists to ultimately decide The Voice of Australia for 2020, following in the footsteps of last year’s powerhouse winner, Diana Rouvas from Team Boy George.

Fans can apply for FREE tickets right now to the upcoming shows, for an unforgettable experience not to be missed.

More details about the innovative new additions for the upcoming season will follow closer to The Voice’s premiere later in 2020.