Debuting on September 10, The Orville should have a pretty decent launch with Fox setting up Seth MacFarlane’s latest offering after an NFL doubleheader. Which is good because, as I say in my video…

Who's Who on The Orville Space Crew? The Cast Reveals Strengths and Quirks

Before Fox’s The Orville sails onto your TV screen, it may help to get proactively acquainted with spaceship’s captain and crew, from the Kermit the Frog superfan to the petite powerhou… 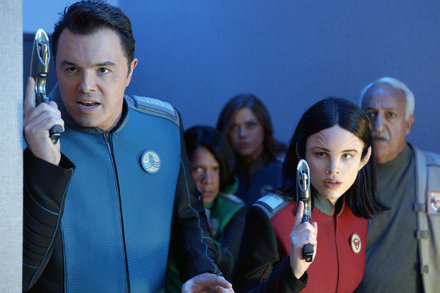 Review: Fox’s ‘The Orville’ is Star Trek, the Next Regurgitation

In his first live-action TV series, Seth MacFarlane, the creator of “Family Guy,” delivers a sincere, unnecessary homage to the “Star Trek” franchise.

New Horizons: Electric Sheep:
Season 3 opener.
The Orville season 3 made its debut on June 2 2022, three years after the end of the previous season.
Coming under the subtitle New Horizons it also marks its debut on Hulu.
This focuses on Isaac and the antagonism from the crew for what he has done at the end of the said previous season.
Quite shocking that this culminating in him, being a robot, committing suicide.
Quite thought provoking how this episode dealt with the topic of suicide and quite the way he was brought back to life after hitting an obstacle to this resurrection.

New Horizons: Shadow Realms:
Season 3, Episode 2.
An admiral comes onboard the Orville for negotiations with the Krill, an admiral who would revealed to be Claire’s ex-husband and former mentor.
Things took an exciting turn when the crew explored an uncharted territory, the consequence of which saw the said admiral turning into a monsters.
There is a moment when Claire’s boys had to hide from this monster and made me think of a similar situation from the first Jurassic Park movie when a couple of kids hid in a kitchen from a dinosaur.
The monster bit of the episode definitely stole the show.

New Horizons: Mortality Paradox:
Season 3, Episode 3.
This starts off with Talla coming back early to the Orville from shore leave.
Surprising how this became significant later on.
Later on the landing party came to a planet and are shocked to see an Earth 21st century high school there.
Even on retrospect it is not what appeared to be which then leads to other things which are not what they appeared to be.
The ultimate revelation in all this was very intriguing and definitely worth the paid off and addresses the question about mortality hence the episode title.