Sonequa Martin-Green returned to her previous workplace as she turned up for The Walking Dead 100th episode celebrations in Talking Dead.
She turned up during the live broadcast of this show and host Chris Hardwick saying that it was a surprise and him telling her she didn’t had to come but she did anyway.
Hardwick said that Martin-Green will be part of Comic-Con forever now that she is part of two franchise Star Trek and The Walking Dead.
Whilst still on the subject of Talking Dead, Star Trek: Discovery’s own aftershow is After Trek and its format is one used by Talking Dead.
Of the two aftershows I have to say that Talking Dead is the better than After Trek.
There is a lot of fun atmosphere with Talking Dead, the sort of which I don’t feel for After Trek.

Star Trek: Discovery Renewed for Season 2 at CBS All Access

Set phasers to renewal: CBS All Access has ordered a second season of Star Trek: Discovery, TVLine has learned.

Lethe:
Season 1, Episode 6.
Sarek gets seriously injured after an attempted assassination on him by a logic extremist.
The katra something that long-time Star Trek fans is long familiar with enters here as Michael communicates with Sarek this way.
Fascinating look at Michael’s history here with Sarek through the latter’s katra.
When Captain Lorca approved a rescue mission on Sarek it sounded compelling when Admiral Cornwell questioned his judgement in sending on this mission a convicted criminal (Michael) and a rescued POW who has not fully recovered from that experienced (Ash).
It felt a little bit out of character when Lorca begged Cornwell not to take the Discovery away from him.
Admiral Cornwell walks into a trap with the Klingons, one that was originally intended for the now injured Sarek and on reflection it did seemed that Cornwell was walking into this trap the moment that scene came on.
This episode has Enterprise getting mentioned as well as Spock who was alluded to earlier on but gets explicitly mentioned here.
Perhaps the best episode so far.

Magic to Make the Sanest Man Go Mad:
Season 1, Episode 7.
This episode goes through a time loop which lasts for 30 minutes and this brings in a great reminder of a previous Star Trek episode that went with this premise that of TNG’s Cause and Effect in 1992.
Of course the predictable description to this is Groundhog Day.
Rainn Wilson is back as Harry Mudd and is presented as the antagonist and it is somewhat hard to reconcile that this is meant to be the same character who was previously played by Roger C Carmel due to the ruthlessness that Wilson’s Mudd has been made out to be.
For the premise it was solidly presented and a good resolution to boot.
Betazoid gets mention here even though Discovery takes place in the same timeline with TOS and the Betazoids weren’t introduced until TNG.
A space whale appears here and as this episode is part of Discovery’s first season, Matt Smith’s own first season as the Doctor also featured a space whale in The Beast Below.

CBS All Access has slotted the premiere date for the remaining six episodes of Season 1 of its hit original series Star Trek: Discovery. Chapter 2 returns Sunday, January 7 after 8:30 PM ET. It beg…

Into The Forest I Go:
Season 1 Chapter 1 finale.
Thrilling end to the first chapter of season 1.
For the Klingons we previously seen speak with subtitles on-screen it is good to finally see them speak English thanks to the universal translator.
Very good when Michael and Ash got on board the Klingon ship and ultimately rescues Admiral Cornwall.
Interesting plot with the 133 jumps.
Captain Lorca kind of broke the fourth wall when he said the next chapter as this episode is the final episode of the first chapter of season 1 and the next episode Despite Yourself will begin the next chapter.
Very good cliffhanger of Discovery finding where they are instead of their intended destination of Starbase 46.

Despite Yourself:
Season 1, Episode 10.
Series directorial debut by TNG alum Jonathan Frakes.
Fascinating beginning to Chapter 2 of the first season which the crew founding themselves in the Mirror Universe.
Amusing on the reveal that Tilly’s counterpart is the captain of this universe’s Discovery and had to pretend to be her.
Shocking on Ash killing Dr Culber.
Thrilling when Michael kill the counterpart of her late colleague on the Shenzhou and becomes the ship’s new captain.
Even though it is in the Mirror Universe, it is appropriate good to finally see Sonequa Martin-Green as Captain of the Star Trek series that she headlines.

The Wolf Inside:
Season 1, Episode 11.
Somehow I wasn’t expecting to see Mirror Sarek here as he tells the nearby Klingons that Michael could be trusted but things sure came to blows when Tyler’s programming got triggered.
The execution of some crew members of the Shenzhou by transporting them into space at the beginning sure foreshadowed when Tyler got the same treatment after the said meeting with the Klingons.
Tyler got saved when he was transported to Discovery because as Saru says Tyler was still accountable to the Federation.
No doubt out of kindness that Michael did not tell Saru about his Mirror counterpart being a slave on the Shenzhou.
Quite a surprise on who the Emperor turned out to be and it’s Mirror Georgiou.

Vaulting Ambition:
Season 1, Episode 12.
Georgiou is Emperor of the Mirror Universe. This already sparked debate of why she is not called Empress instead.
Quite risky that Michael revealed to Emperor Georgiou who she really is.
What a revelation at the end that the Lorca that we have known all this time is from the Mirror Universe.

What’s Past Is Prologue:
Antepenultimate episode of season 1.
Similar in name to the Deep Space Nine episode Past Prologue.
Curiously whereas the Discovery episode is the third to last of its first season, the Deep Space Nine episode is the third episode of its first season.
For the Discovery episode quite thrilling as Lorca frees his old crew to do battle with Michael and Emperor Georgiou.
The fight is exciting to see and what a moment when Lorca is killed by Emperor Georgiou. Guess they couldn’t afford Jason Isaacs for the second season.
Perhaps I should not be surprised that Michael saved Emperor Georgiou as she got her transported to the Discovery together.
What a shock that Discovery has arrived back in their own universe nine months after they left it and that the Klingons have won the war.

The War Without, The War Within:
Penultimate episode of season 1.
Intriguing episode as the Discovery crew adjusts back to their universe jumping nine months ahead.
I can sympathise with Tyler being ostracise coming after his actions as Voq.
Key moment when Admiral Cornwell mentioning Captain Archer and the Enterprise he commanded.
Surprise on Emperor Georgiou assuming the guise of her late counterpart. 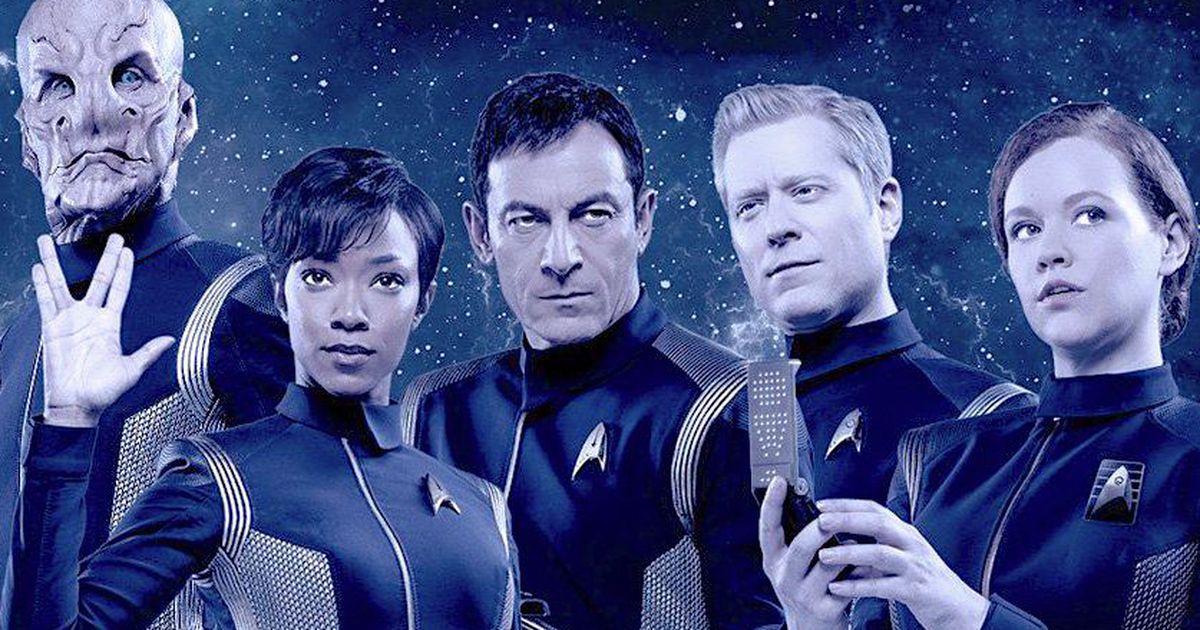 Why 'Star Trek Discovery' Season 1 was a cosmic dud

Warping from plot point to plot point at ludicrous speed, the show found little time to care for characters.

I hung on till the mid season break, not bothered with watching the second part.

Will You Take My Hand?:
Season 1 finale.
Pretty good although also dull moments end to the first season.
When Tilly realises that Georgiou is from the Mirror Universe she does something before she was told not to do that by Michael.
Certainly made me think of the Tenth Doctor saying that to his companions whenever they say something they shouldn’t be saying.
Georgiou mentioned bread and circuses and Bread and Circuses is also the name of a TOS episode.
Good that Michael’s honour with Starfleet has been restored.
Oh wow what a cameo by the Enterprise at the end and an updated version of the TOS theme played in the end credits.

In regards to the episode title it is a question I like to ask Karen Gillan again and again.

In Doctor Who: Closing Time (2011), the Doctor and Craig make reference to Star Trek and Beam Me Up Scotty.
This is prescient to the fact that this episode guest starred Chris Obi who played security guard George as he later played T’Kuvma in Star Trek: Discovery. 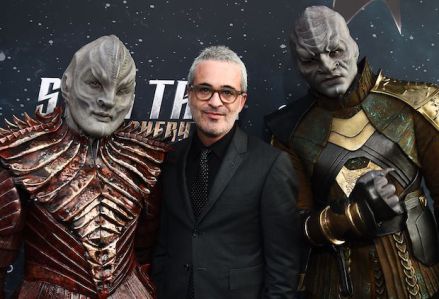 Interesting that it starts off with her communicating with her mother and ultimately seeing being kind of mother to the stowaway that she encountered the said runaway.