Netflix has renewed the original series Ozark for Season 2, with 10 new episodes.

In Ozark, This money-centric present day story revolves around financial planner Marty (Jason Bateman) and Wendy Byrde (Laura Linney) and their family’s sudden relocation from the suburbs of Chicago to a summer resort community in the Missouri Ozarks. Rather than the familiar skyscrapers and trading floors, Ozark explores capitalism, family dynamics, and survival through the eyes of (anything but) ordinary Americans. For Ozark, executive producer and director is Jason Bateman, with executive producer/writer Chris Mundy, and executive producers Bill Dubuque and Mark Williams.

The series is produced by Bateman’s Aggregate Films in association with Media Rights Capital for Netflix, and was created by Dubuque and Williams.

Academy Award® nominee Janet McTeer (Albert Nobbs, The Honourable Woman) joins the award-nominated, Netflix drama series Ozark for season 2. McTeer will play a Chicago based attorney with links to the cartel. In making a deal with the devil, she becomes a potential threat to the Byrdes.

Jason Bateman was recently nominated for a Golden Globe award for his work on Ozark, and both Bateman and Laura Linney received SAG award nominations for Outstanding Actor and Actress, respectively, for their work on the first season. Ozark also received a Writer’s Guild Award nomination for New Series.

The Netflix original series Ozark stars Jason Bateman as a Chicago financial advisor, who has been quietly laundering money for a drug kingpin (Esai Morales), and must quickly uproot his wife (played by Laura Linney) and children (played by Sofia Hublitz and Skylar Gaertner) and move the operation to The Ozarks, after his partner is caught cheating the business. There, he bumps heads with both a local drug dealer whose business he inadvertently interrupts, and a clan of ruffians, led by their 19-year-old niece (standout Julia Garner), who want his money, all the while avoiding the eye of a tenacious FBI agent (Jason Butler Harner). He must complete his laundering, to save the life of his family, as they struggle to find their own path in this seemingly foreign way of life. Jordana Spiro, Peter Mullan and Lisa Emery also star. 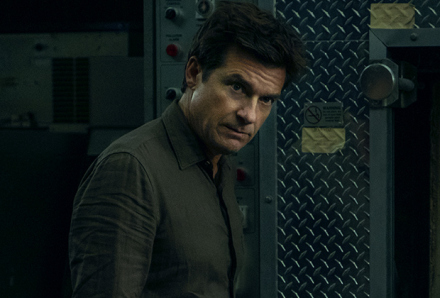