Nintendo President Kimishima has stated that:

We have heard speculation that Nintendo Switch will replace the Nintendo 3DS, as both are game systems that can be played outside the home, but Nintendo 3DS has unique characteristics that differ from those of Nintendo Switch. Furthermore, the price points and play experiences offered by the two systems are different and we do not see them as being in direct competition.

We plan to continue both businesses separately and in parallel.

The following slide reveals upcoming launches on the Nintendo 3DS: 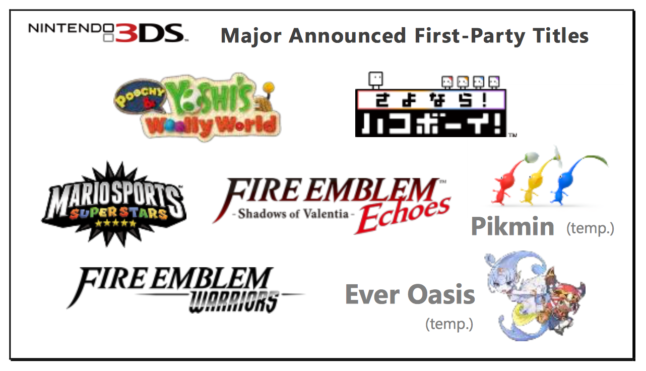 This slide shows the major announced games for Nintendo 3DS that have been recently released or that are announced for release later this year in our markets. We will have several follow-up titles from popular franchises on Nintendo 3DS and we are developing many other unannounced titles to continue to enrich the software lineup going forward.

The game in the top right of the slide is Goodbye! BoxBoy! Other titles are in English.

Nintendo TVii, Wii U Chat & Miiverse Will Be Ending On November 8th

Gradually, services from the Wii U have been coming to an end. Moments ago, Nintendo announced that Nintendo TVii, Wii U Chat and Miiverse will be discontinued on November 8th at 15:00 JST. The off…