ARN is excited to announce the evolution of The 3PM Pick Up in 2017, welcoming high profile personalities Rebecca Judd and Yumi Stynes to host alongside Katie “Monty” Dimond on the national 3pm-4pm show on the KIIS Network in 2017.

“The 3pm Pick Up is an hour of fun stories and hot topics of the day, brought to you by intelligent, interesting women who have a fantastic sense of humour.

“ARN was the first-to-market with a show in this unique 3pm time-slot and position back in 2011, creating an entertaining afternoon show that helps our listeners keep in touch with the real conversations that women are having every day around the country.

“Our new 2017 hosts Monty, Rebecca and Yumi are a mix of media professionals, bloggers, business owners, and mums who have a serious social media footprint that has turned them into personalities with real influence among their engaged audience.” 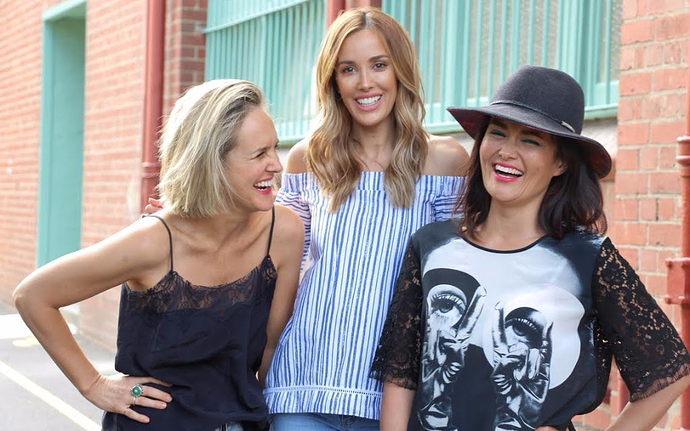 Melbourne’s Midsumma Festival has a new sponsor in KIIS 101.1

The announcement follows similar ARN event-based partnerships in Sydney with the Sydney Gay and Lesbian Mardi Gras and the City of Sydney.

Hot on the heels of the recent partnership announcement between Sydney’s KIIS 1065 and the Sydney Gay and Lesbian Mardi Gras next month, ARN’s KIIS 101.1 is also an official media partner of Melbourne’s premier queer arts and cultural celebration, Midsumma Festival.

The partnership saw KIIS 101.1’s ‘KIIS for Equality’ and ‘KIIS with Pride’ integrated activations come to lifeacross the festival, including a ‘Rainbow KIISing station’, culminating in the participation of yesterday’s annual Pride March.

KIIS drive presenter Dave ‘Hughesy’ Hughes joined a contingent of KIIS staff and talent through the streets of St Kilda on the annual walk, while drag duo ‘Lady Business’, featuring one of Australia’s best known and award winning Drag Queens, Art Simone, joined along to entertain the crowd.

ARN’s Chief Marketing Officer Anthony Xydis said KIIS 101.1 reflects Melbourne in all its diversity and is proud to embrace the city’s dynamic celebration of equality and inclusiveness.

“We are excited to be partnering with the Midsumma Festival this year - Melbourne’s biggest celebration of diversity, inclusivity, and equality – something we at KIIS 101.1 are passionate about. KIIS 101.1 has always celebrated the best of Melbourne - its culture, great music and lifestyle – and this partnership is a perfect reflection of that.”

Now in its 30th year, Melbourne’s Midsumma Festival features a program of more than 130 events including visual arts, performance, ﬁlm, parties, sports, and talks. It is on now until Sunday, February 5.

Well well, Dumb and Dumber are at it again… when will these two fools be sacked? Kyle and Jackie tried to play a hilarious prank and it went way, way too far.

Here’s a tip for 97.3 - stop being such a repetitive, boring, stand-for-nothing station. It’s time to bite the bullet and give the market Smooth through the 50-50 JV.

Life after Robin Bailey gets tougher for 97.3FM

The ‘You Get A Car’ giveaway is thanks to the new Hyundai Reinvented i30.

Seriously ARN, get rid of this pig and get some credibility back.

“THERE are people out there you can grab on the pu**y.”

Kiis Network has launched a new women's radio show - Show + Tell, which will run on Saturdays for 11 weeks from October 7. The announcement: ARN is excited

‘I hate them — I refuse to do their show’

Hughesy and Kate finish up at KIIS.

Soon to be on air somewhere else.

Will & Woody will do National Drive. Talent Watch: No love lost as Thinkergirls are axed at KIIS - Radio Today

Today’s announcement follows ARN’s recent unveiling of the first phase of its transformative 2018 strategy for the KIIS Network, with new national Drive Show ‘Will & Woody’ aka Will McMahon and Woody Whitelaw and new Breakfast show ‘Jase & PJ’ aka Jason ‘Jase’ Hawkins and Polly ‘PJ’ Harding for Melbourne’s KIIS 101.1.

Celeb HQ will air nationally from 7pm – 8pm, right after Kyle & Jackie O’s Hour of Power, and feature all the latest gossip from Hollywood and home with Zoe Marshal and John ‘JC’ Caldwell, and Craig ‘Lowie’ Low will also contribute special news and features from his base in LA.

“This announcement completes the unveiling of a new strategic direction for the KIIS National Network that has been in planning for the past 12 months.

“KIIS is a vibrant network and this is an exciting evolution for the night schedule with the focus on celebrity news, entertainment and fresh on-air teams. Celebrity HQ is going to be a fun, irreverent and exciting new nights show and I am pleased to welcome Zoe Marshall back to KIIS as she teams up with our resident entertainment reporter JC and Lowie. This new national evening line-up will strengthen and re-energise our offering across the network to be even more competitive in all markets next year and beyond.

“I would like to thank The Thinkergirls – Stacey June and Kristie Mercer – for being part of the KIIS team for the past two years. They have delivered a uniquely entertaining show to a loyal audience and we are working together to explore opportunities for the future.”

Zoe Marshall has worked in the media for the past 10 years as a host on radio and TV and as an online contributor.

Previously one of the hosts of KIIS FM’s 3PM Pick Up, Zoe is married to NRL’s Benji Marshall and is a self-confessed ‘over sharer’. She is host of “The House of Wellness” on Ch7Two every Sunday and has appeared on The Project, Sunrise, The Morning Show and The Daily Edition.

John ‘JC’ Caldwell is the resident entertainment reporter for the KIIS FM Network and the Kyle & Jackie O Show – his passion for entertainment and his natural rapport with global celebrities has made him one of the hottest names in entertainment media in Australia and the US.

Lowie is an award winning Australian comedian, TV and radio host and writer. He has featured on MTV, Fox, Nickelodeon and The Comedy Channel and is currently the host of Lowie Live which can be heard on iHeartRadio.

‘I can only wish the new kids luck, they’ll need it’

RADIO can be a brutal game, as on-air favourites Dave Hughes, Kate Langbroek, Meshel Laurie and Matt Tilley were reminded this week.

KYLE Sandilands says he can empathise with Bachelorette star Sophie Monk being swindled out of a large sum of money — because the same thing happened to him.

KIIS FM host Will McMahon was hit by a car while riding a bike accident riding through Melbourne today.