AKA Pork Chop:
Season 2, Episode 10.
In contrast to her explosive resignation from her radio show and under the influence of the IGH drug, Trish now without the IGH drug bombs at her audition for a TV news gig.
Never thought I would see a difference between an explosion and a bombing.
Quite intense when Ailsa threatened Trish her life.
Absolutely harrowing when Jeri found her place robbed by Green and Ryback.
Ailsa gets a mean guard in Dale Holiday and horrifying when he maced Jessica at the end with her killing him afterwards.

AKA Three Lives and Counting:
Antepenultimate episode of season 2.
David Tennant is back as Kilgrave in this his only appearance in the second season.
Having been killed off by Jessica at the end of the previous season, Kilgrave appears as a hallucination to her.
Hallucinatory Kilgrave is just as menacing towards Jessica to when the real Kilgrave was alive.
Malus gets killed in an explosion and perhaps not surprising Ailsa upon learning this in the news kills her new guard (despite being friendlier than her predecessor) and breaks out of prison.

AKA Pray for My Patsy:
Penultimate episode of season 2.
Intense on seeing Ailsa on a rampage with her determination to kill Trish who is now in a hospital.
In no doubt a sad irony of a joke, the alive and bed-ridden Trish is placed in a morgue for her protection.
What a tragedy that Detective Sunday became a casualty when Ailsa jumped out of the hospital with her.
Jessica could not do it in killing Ailsa and instead the latter subdued the former in the lead-up to the season finale which is called AKA Playland and Playland is no doubt where Ailsa is taking Jessica.

AKA Playland:
Season 2 finale.
Good moment when Jessica and Alisa saved a family from an accident.
I guess it was always going to be Alisa meeting her end here and ended with her being shot in the head by Trish whilst she was talking to Jessica at Playland.
Considering that Alisa was hunting for Trish to kill her, it is Trish who does the exact same thing on Alisa and succeeded in doing so.
Intriguing as it appears that Trish has powers. 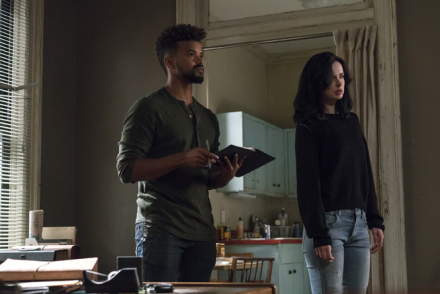 Netflix has picked up a third season of Marvel’s Jessica Jones. The renewal comes a little more than a month following its second-season launch on March 8, International Women’s Day. Th…

The upcoming third season of Jessica Jones after it got knifed by Netflix.

A.K.A The Perfect Burger:
Season 3 opener.
Given the episode title had a Double Quarter Pounder with Bacon from McDonald’s whilst watching this episode.
Enjoyable start to this the final season with Jessica finding out what Trish been up to and culminating with her stabbing at the end.

AKA You’re Welcome:
Season 3, Episode 2.
Limited appearance by Jessica as Jessica herself Krysten Ritter directed this episode.
Pretty good on seeing Trish becoming the hero that she wanted to be.

AKA I Have No Spleen:
Season 3, Episode 3.
Jessica literally has no spleen.
This sure made for an interesting episode and what she realised at the end.

AKA Customer Service is Standing By:
Season 3, Episode 4.
Interesting the case with Erik.
In reference to the episode title quite a conversation by phone between Jessica and Trish whilst the latter was on live TV regarding a sweater.

A.K.A I Wish:
Season 3, Episode 5.
Shocking that Peter commits suicide in order to get at Jeri.
Also shocking at the end that Salinger abducts Erik.

A.K.A Sorry Face:
Season 3, Episode 6.
Not bad episode on Salinger’s abduction of Erik and how Jessica found them.
Things sure got complicated with the legal ways to keep Salinger behind bars but I appreciate the analogy with Al Capone.

A.K.A The Double Half-Wappinger:
Season 3, Episode 7.
Due to the episode title, managed to have a Double Cheeseburger in the last minutes of this episode.
What a shock that Jeri is representing Salinger.
Intriguing by what Jessica found under the gazebo.
Jessica sure bested Salinger in wrestling.

A.K.A Camera Friendly:
Season 3, Episode 8.
The episode title refers to Jessica being on TV to appeal for help in looking for Salinger’s intended next target and she is anything but camera family.
Funny when Trish reacted to being called unhinged during this interview.
Something shocking happens to a long familiar character something which I sense at a moment beforehand and sure sets up that ending.

A.K.A I Did Something Today:
Season 3, Episode 9.
Jeri saying on taking back the city made her sound like Oliver Queen from Arrow.
What a choice Jessica made in destroying certain evidence in order to save Trish.
What a shocker that a beat cop that Jessica confronted was found murdered.

A.K.A Hero Pants:
Season 3, Episode 10.
Sure came as a surprise to Trish on the turnout on Dorothy’s funeral which seemed to undervalue the person that she was.
Shocking that this episode by Jessica’s arrest and by what Trish had done.

A.K.A Hellcat:
Antepenultimate episode.
Written by Jane Espenson.
Interesting flashbacks with Trish as a girl with mother Dorothy preparing her in the acting world.
As a child actor we see Trish at a table read through. At the same time in seeing this, I saw the antepenultimate episode of BH90210, The Table Read which coincidentally is about what it says in the episode title.
We see all what was known before but this time from Trish’s perspective.
Nice that this episode provides a clear picture in all this.

A.K.A A Lotta Worms:

Given its episode title I got a packet of squirm lollies to have whilst watching this episode.

Jessica with Salinger decides to go upstairs as that was the only way to get away from Trish.

In Doctor Who: The Angels Take Manhattan, Amy (my wife Karen Gillan) made the same decision when a Weeping Angel was blocking her way.

In both cases Jessica and Amy went up to the roof.

Just as A.K.A. A Lotta Worms is the penultimate episode of the third and final season of Jessica Jones, The Angels Take Manhattan is my wife Karen’s swansong as Amy and from her third season of Doctor Who.

Tragic as Trish recounts that she had to frame her father in order to save her mother Dorothy as he was beating her and never saw him again after he got arrested.

My closest equivalent is Geoff McNeil who is responsible for the misdirection of my life and if I ever see him again I will let him know how he got it so wrong.

Although I saw something like it before, quite a trick that Jess pulls on Salinger to get his confession.

Quite brutal the way Trish kills Salinger demonstrating the further downward path that she is heading into.

A.K.A. Everything:
Series finale.
Cameo by Luke Cage and comes after the end of the Luke Cage series.
Also a cameo by David Tennant as Kilgrave but voice only.
Sad that Trish got arrested and the way that Jessica did to bring her in.
Not bad ending to the series with Jessica at the station.