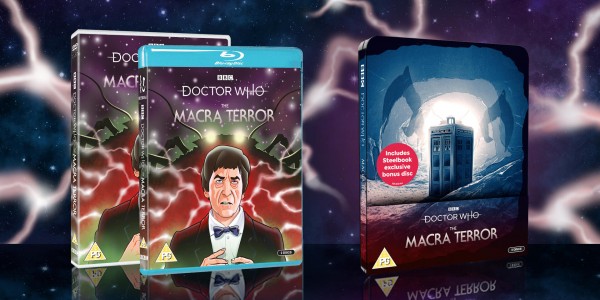 The cover art and special features of the animated version of the missing Doctor Who adventure The Macra Terror, releasing on DVD, Blu-ray, special edition Steelbook and digital download on 18th March 2019, have been revealed.

From Doctor Who: The Encyclopedia
Liao Dynasty – The Doctor sent Matthew See and Karen Gillan to the Liao Dynasty for a Chinese takeaway – it wasn’t a restaurant but the actual 12th-century palace. The guards were not happy. [The Gunpowder Plot]

Baker’s End: The King of Cats:

The King of Cats is the first story in Baker’s End starring Doctor Who luminaries Tom Baker and Katy Manning and written by Paul Magrs.

I was very glad that this had Tom and Katy finally working together.

Tom plays a different version of himself and there is a funeral for him in the village of Happenstance which was attended by Suzy Goshawk played by Katy.

However Tom is not as dead as he seems and the hilarity this ensues and this embroils Suzy in it.

Jameson’s played Tom’s housekeeper Mrs Frimbly and she also played another housekeeper Mrs Wibbsey, companion to Tom’s Fourth Doctor in the Nest Cottage series which was also written by Magrs.

The interview with Tom at the end was enjoyable and it was very amusing how long it took Magrs to identify himself.

The Fifty-year Delay is a short story that was originally published in the 50th Anniversary Annual and later republished as part of the Heroes and Monsters Collection.

Intriguing story in which the Doctor meets Ryan Goodman in the Underground Station as they battle it out against an ancient time bird.

Broken is the penultimate episode of the second Big Finish Torchwood season.

Written by Joseph Lidster and released in July 2016.

This is set during season 1 with it coming just after episode 4 Cyberwoman, during the course of episode 5 Small Worlds (with Jack getting a call from Estelle), episode 6 Countrycide and the last setting in relation to the TV series is sometime after episode 7 Greeks Bearing Gifts as Jack had recently killed Mary.

With Greeks Bearing Gifts being episode 7, Lidster explained that he wrote Broken as if it were episode 7A.

As this episode only feature Ianto and Jack as the main Torchwood characters, the others are mentioned but conveniently they just happened to be absent in the episode’s proceedings.

Much of Broken deals with the aftermath of Cyberwoman, as Ianto had just lost Lisa.

Broken also presents Ianto’s experiences in Countrycide had on him.

This comes as Ianto enters a new pub and befriends barmaid Mandy.

I sensed rightly there was something more to Mandy than she initially appeared.

In a climax to this Ianto’s promise of revenge over Lisa came into play, a promise that was not addressed and forgotten about in the TV series.

Ianto got to experienced something that he did not experience in the TV series and that same experience for Jack is akin to what he went through in the changed world in Turn Left.

In detailing Ianto’s feelings particularly about the loss of Lisa in Cyberwoman, Broken fits in perfectly like an episode of season 1 from whence it is set.

The cover has Ianto and Jack in an embrace and made me think that this is a love story between the two.

However while this particular subject is touched upon, this was mainly about

Ianto and what being part of Torchwood has done to him.

Broken is the feeling inside of one’s self being in that state.

This made me think of the movie The Party’s Just Beginning as it ran more or less on similar lines which made me appreciate Broken.

I think about The Party’s Just Beginning all the time since it is from my wife Karen Gillan.

Dark Eyes 4: A Life in the Day:
Opener of Dark Eyes 4.
Written by John Dorney.
Intriguing with the premise and quite lovely with how Liv spends the said day.
Live spends the day with Martin Donaldson whom she and the Doctor meets whilst the Doctor was on his latest investigation.
Fascinating that whilst all this is going on the Doctor and Liv gets hunted by some mysterious force.
This climax in a certain revelation by Martin.
With Liv separated from the Doctor for much of this episode, the Doctor has Martin’s sister Kitty as a kind of stand-in companion.
Kitty is played by Beth Chalmers and she knows what it is like to be a companion as she briefly played Seventh Doctor companion Raine Creevey.
No doubt Kitty was written that way for Chalmers to play due to certain issues that prevents Big Finish from using Raine again.
Having travelled with the Seventh Doctor, Beth Chalmers makes for a good foil for the Eighth Doctor.

A Life in the Day included a movie theatre in which Liv and Martin and then the Eighth Doctor and Kitty were in separately.

Recent to my listenings of A Life in the Day, saw the Scream episode When a Stranger Calls which also featured a movie theatre and directed by Patrick Lussier and Lussier had edited the 1996 Doctor Who TV Movie which debut the said Eighth Doctor.

UNIT: Shutdown: Power Cell:
Opener of Shutdown, the second season of UNIT.
Written by Matt Fitton.
This marked Alice Krige’s (the Borg Queen from Star Trek) debut as the villain Felicity Lyme.
Absolutely enthralling start to Shurdown which got sparked by the disappearance of a UNIT scientist.
Terrifying the menace that turns up here.
Cute when Osgood referenced The Incredible Hulk.
Neat how a certain blue box and a man in a bow tie made their cameos here which sets this sometime after The Day of the Doctor.
Exciting climax but too bad the tragedy that came with it.

Dark Eyes 4: Master of the Daleks:
Penultimate episode.
Written by John Dorney.
Master of the Daleks sees the return of Molly but she was not played by Ruth Bradley and she is played instead by Sorcha Cusack as a Molly 40 years older in an alternate Earth and goes by the name of Mary Carter.
Cusack is the daughter of Cyril Cusack who was one of several actors considered for the First Doctor.
On television I see Sorcha Cusack in her regular role in Father Brown.
Master of the Daleks is a horrifying and very good story set on a bleak alternate Earth.
Truly impressive when Liv used perfume as mace on the Master.
Liv questions whether the Master and the Dalek Time Controller really called each other by their titles since it is a contradiction. An impressive philosophical question.
Also very good in the midst of the exciting climax how the Master is last presented in this episode in typical Master style.

Come to think of it I am pretty sure Marilyn’s voice (presumably Howard’s) was heard calling the Doctor as they were about to get married.

Howard however wasn’t credited in A Christmas Carol.

Impulse 2.3 For Those Lost had a conversation about the impact of dream with Townes (Daniel Maslany) bringing up as an example Doctor Who’s Dream Lord.

For a Doctor Who reference the Dream Lord was an unexpected one.

The Impulse episode along with the entire Impulse second season was released on October 16 2019 almost seven months before the tenth anniversary of Amy’s Choice, the Dream Lord’s only appearance, on May 15 2020.

Dalek Guns in first episode of The Mandalorian:

How much do you remember from Series 12? | Doctor Who

As we race towards the series finale, how much can you remember about the series so far?

Got 6/7 with the Orphan 55 question stumped me.

UNIT: Silenced: House of Silents:
House of Silents is the opener of Silenced, the third UNIT season.
Written by Matt Fitton.
As indicated in the umbrella title, the third season is about the Silence.
Interesting how UNIT starts their encounter with the Silence as they investigate an old woman who lives in the said house where the Silents reside.
With no Doctor around to explain who the Silence are, UNIT found themselves with a new enemy they have no idea what they are like and how to handle them.
Interesting how UNIT’s handled this initial encounter of the Silence.
Curious that there’s is one thing that Kate got wrong about the Silence and that they are not murderers.
The Silence does have the ability to murder and here it is demonstrated in relation to the said house.
A very spooky start to this battle between UNIT and Silence and a very good recreation of the Silence by Big Finish…